**Don't want to read the specifics? Check out the first reply for the summary.**

In order to help to popularize these two breeds (nominally Iberians, but since I have them, also Araloosas) I've decided to open all of my show strings to be accessed at any time to any player, available upon request. First, I'll introduce both breeds.

Perhaps considered the 'original' dressage horse, this large warmblood is supposed to have been a key factor in arguably most breeds alive today. Having a long history as first nominally a war horse and then a choice for nobility and onward toward more modern occupations (dressage), this breed today appears to've lost itself among the long list of other warmbloods from around the world.

On Horse Fable, this breed is considered a 'Crossbreed' and is created by crossing the Andalusian with the Thoroughbred. Set up still for dressage, I have found that my line succeeded very beautifully in cutting. So this is what my stock excels at. However, with just a little work (perhaps a single generation or two), these horses can be retrained to excel in Barrels, Flats (some of mine already do quite well in flat racing), or Show Jumping and perhaps with just a little additional work, could work out very well in Hunter or Reining or also in Trail or Eventing.

This horse (as the internet suggests) appears to the redevelopment of the Nez Perce peoples and what is considered the 'original' Appaloosa as it was in the 18th and 19th centuries. But is indeed the cross between the Appaloosa and the Arabian.

On Horse Fable, this is also where we get this 'Crossbreed', but crossing an Appaloosa with an Arabian. Set up for Endurance, I have chosen my line to be Pole specialties, but I have also found that where one might struggle in poles either because of competition or because of skills, that horse can deal with endurance competitions much, much easier. With a little retraining (a generation or two), these horses I have could be successfully shown in Hunter Under Saddle or possibly Barrels or Show Jumping. There are other options, but they may take a little additional effort. However of those, the best options might be Western Pleasure or Dressage.

How This Works/What I'm Offering

I'm offering access to any of my Iberian or Araloosa stock for breeding purposes. Feel free to pick the mare and the stallion, make them a cross between the Araloosa and the Iberian or make them pure. Keep an eye on the levels and if you like color, take a look at their color genes (all of mine are tested).

I'll match them together and deliver a foal. If you like the foal, offer a price you can afford for it (with one exception of those 18 years and older, see below). This means I'll accept ingots or bits and it will always fall within your price, even if you're a newbie and have just a single bit to pay. Yes, this does rely very heavily on you being honest about what you're purchasing.

You can request breedings as many times as you like, but you may have only one open request at a time.

What happens if I don't like the foal? If, for whatever reason, you don't like the outcome foal, you're free to refuse it. The foal will likely be put on the open market for sale, either in the auctions or in open sale or both. There's also the chance of the foal being retired, so please keep this in mind.

Any mare or stallion of the above two breeds are open for requestable breedings, the list will appear following. I will also offer outside coverings to your mare or stallion from your choice, this will be set up as a private breeding (and considered a breeding separate from the forum offer). However, since I level my horses, I will require your horse to be at least level 50, or be of an advanced age where levels are simply lacking. In this second case, coverings will be considered on a case by case basis.

I will even offer straws and eggs, but these will be restricted to you paying the pull-fee PLUS paying the fee for basic studding/brooding below. I'm looking to offer live foals for people who're interested and not those that want to 'save for later'.

I... have money, but am awful at figuring out a horse's worth. Can you help guide me there? Yeah. For those of you that have the funds and are interested at being at least minimally fair but do have trouble with what that 'Fair' might be, below is a breakdown list of what I would put the horses up for open brood/stud. If you combine the two, you'll get a fair idea of what I think the foal's worth should minimally be.

Any reason a horse may not be available? Obviously, if the horse is on cooldown. Otherwise, if a horse has been overbred (more than seven living offspring or so), I will likely NOT allow any straw or egg pulls and will likely NOT allow any outside coverings... with very few exceptions, but live foals can still be bred. Also, if I've already sent you or I see on your account multiple foals by the same sire or brood (or both) of mine, I may close off one in particular to help spread the blood around a little more. So, please make sure you choose different parents (exception with this is if I have only a couple choices) if you want more than one of the same breed.

Also, once a horse breaches their 18th birthday, they will no longer be available to this program... temporarily. I will need my own stock from such a horse and when I'm happy with my own foal, the elder-horse will be applied to open breeding market for a set fee. Once this happens stud and brood fees will be set permanently and the horse's fee MUST be included in the foal's pickup cost.

Pricing, for those that need some guidance

Please remember, this is only to aid people who want to collect foal's and can afford to pay. Also remember, these are estimates and not actual and based on current market values (July of 2022). When the horse goes up for public stud or brood after 18 years, the market may have changed or I may feel the horse is worth more or less than listed estimates based on color or stars, or also their previous foal use (living or otherwise may both factor in).

Stallions within Tier 2 or above level 90: usually somewhere starting at 5000 bits OR 10 ingots

Mares within Tier 2 or above level 95: usually somewhere starting at 8000 bits OR 20 ingots

I haven't had too many Tier 2 or level 90+ Araloosas that survived to public standing so I'm unsure what I'd actually price them for.

Now to the fun part

*Minimal foal TB's are determined by adding both parents levels and dividing by 10.*

*Any Purchased horse will have limited outside foals, to preserve the breeder's lines (exception to breeder's requests).*

*Any horse up for ingot stud or brood, can be renegotiated into bits for THIS forum only.*

*Gray horses will have noted original colors where available.* 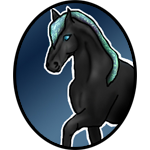 What you need to know.

Choose two from above, I'll breed them, produce a foal and sell it to you for a price you can afford.