Hello, all! It’s the time of the year when we begin to wind down but also announce some 2022 plans!

Due to life circumstances, we have fallen slightly behind schedule for feature additions and have decided for the rest of December, we are dedicating ourselves to bug fixes. We want the game to be enjoyable for everyone who plays, and we know some bugs are hindering that.

December’s new breed is the Morgan. This will be released either the 18th or 25th due to the massive number of layers poor Solo is having to make. She’s a busy bee with lots on her plate but Morgans will be here for the holidays!

Note that staff will again be going on vacation to spend time with their families from December 23 to Jan 3 so not many updates will be posted during this time. Keep an eye out for a wrap-up post as we review events and updates from 2021. What a year it’s been!

Bedouin and I are meeting in person on December 18th to plan out 2022 and all the exciting content and changes it will bring. We’ll be looking at where we see the game expanding, new features, content, and any adjustments needed. Oh, and something about merch? 👀

Day-long planning sessions are where a lot of our best ideas come from. We want to include the players in 2022 planning and have a feedback form for you to give ideas, thoughts, feelings etc.. Have a tiny quality of life suggestion? Maybe a big feature idea? The form also includes the final new breed vote which is detailed further below.

The first 2022 update is planned for late January and will include the launch of the explore feature. Like quests, this has a ton of content and needs quite a bit of testing beforehand. Explore will include many new items, wild horses, introduce new crafting items, and more.

Previously, a vote was sent out with a list of 100+ horse breeds for everyone to vote for their top 6. We have tallied the votes and compiled a list of the top breeds for a final round of voting. Trakehner? Shire? Maybe Icelandic? Only the top voted breeds will be added into the game in 2022 so be sure to vote! Voting ends December 20th at 12:00 PM EST/ game time.

As much as I love to scroll the internet looking for horses to inspire white markings, I’ve lost quite a bit of creativity in making white markings. In January, it is my goal to add more variations for breeds with leopard genes. To help with the effort, I wanted to open up the opportunity for you all to design a white marking! This forum post details how to enter and to submit a design. We are excited to see what you all come up with!

At this time, the only breeds with marking variations for sabino, tobiano, rabicano, and roan are purebreds. Previously, it had been decided to add the variations to crossbreeds once the cross has a variation bred into it. However, we have decided to go ahead and add these markings in the coming months. If you have a crossbreed that has a marking variation it is possible it will have an image error or default to the non-variation layer. Once all the art is done and uploaded these will revert to the variation!

The W# gene has been fixed for all breeds and the correct images are now displayed. Horses affected pre-fix should be fixed now. Some of you may notice some horses have a bit of a new look. Several images were showing as solid white but have now been fixed. The new white layers are specific to the W# gene a horse has meaning, the W6 gene will display differently from the W20!

As a note, some dominant white horses do not display large amounts of white such as those with the W20 gene. These typically display more like sabinos but in the homozygous form (W20W20) will display much more white.

Sometimes change is slow to come but between tackling adding thousands of image layers and bug fixes, we have managed to make a few changes:

Those pesky bugs that love to bug us are still lingering but are being squished! We managed to wrangle a few:

Have a wonderful rest of the week everyone! 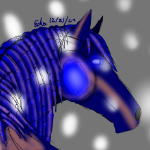 Thanks for all the hard work guys! I hope it's ok that I submitted twice for the voting, not for the voting itself, but I just thought up two ideas I wanted to submit and I couldn't do one without the other.